The Galápagos Islands (official name: Archipiélago de Colón, other Spanish name: Las Islas Galápagos, part of the Republic of Ecuador, are an archipelago of volcanic islands distributed on either side of the equator in the Pacific Ocean surrounding the centre of the Western Hemisphere, 906 km (563 mi) west of continental Ecuador. The islands are known for their large number of endemic species and were studied by Charles Darwin during the second voyage of HMS Beagle. His observations and collections contributed to the inception of Darwin’s theory of evolution by means of natural selection.

The first recorded visit to the islands happened by chance in 1535, when Fray Tomás de Berlanga, the Bishop of Panamá, was surprised with this undiscovered land during a voyage to Peru to arbitrate in a dispute between Francisco Pizarro and Diego de Almagro.De Berlanga eventually returned to the Spanish Empire and described the conditions of the islands and the animals that inhabited them. The group of islands was shown and named in Abraham Ortelius‘s atlas published in 1570. The first crude map of the islands was made in 1684 by the buccaneer Ambrose Cowley, who named the individual islands after some of his fellow pirates or after British royalty and noblemen. These names were used in the authoritative navigation charts of the islands prepared during the Beagle survey under captain Robert FitzRoy, and in Darwin’s popular book The Voyage of the Beagle. The new Republic of Ecuador took the islands from Spanish ownership in 1832, and subsequently gave them official Spanish names. The older names remained in use in English-language publications, including Herman Melville‘s The Encantadas of 1854.

Volcanism has been continuous on the Galápagos Islands for at least 20 myr, and perhaps even longer. The mantle plume beneath the east-ward moving Nazca Plate (51 km/myr) has given rise to a 3-kilometre-thick platform under the island chain and seamounts. Besides the Galápagos Archipelago, other key tectonic features in the region include the Northern Galápagos Volcanic Province between the archipelago and the Galápagos Spreading Center (GSC) 200 km to the north at the boundary of the Nazca Plate and the Cocos Plate. This spreading center truncates into the East Pacific Rise on the west and is bounded by the Cocos Ridge and Carnegie Ridge in the east. Furthermore, the Galápagos Hotspot is at the northern boundary of the Pacific Large Low Shear Velocity Province while the Easter Hotspot is on the southern boundary.

The Galápagos Archipelago is characterized by numerous contemporaneous volcanoes, some with plume magma sources, others from the asthenosphere, possibly due to the young and thin oceanic crust. The GSC caused structural weaknesses in this thin lithosphereleading to eruptions forming the Galápagos Platform. Fernandina and Isabela in particular are aligned along these weaknesses. Lacking a well-defined rift zone, the islands have a high rate of inflation prior to eruption. Sierra Negra on Isabela Island experienced a 240 cm uplift between 1992 and 1998, most recent eruption in 2005, while Fernandina on Fernandina Island indicated an uplift of 90 cm, most recent eruption in 2009. Alcedo on Isabela Island had an uplift of greater than 90 cm, most recent eruption in 1993. Additional characteristics of the Galápagos Archipelago are closer volcano spacing, smaller volcano sizes, and larger calderas. For instance, Isabela Island includes 6 major volcanoes, Ecuador, Wolf, Darwin, Alcedo, Sierra Negraa and Cerro Azul, with most recent eruptions ranging from 1813 to 2008. The neighboring islands of Santiago and Fernandina last erupted in 1906 and 2009, respectively. Overall, the 9 active volcanoes in the archipelago have erupted 24 times between 1961 and 2011. The shape of these volcanoes is that of an “overturned soup bowl” as opposed to the “overturned saucer plate” of the Hawaiian Islands. The Galápagos’s shape is due to the pattern of radial and circumferential fissure, radial on the flanks, but circumferential near the caldera summits. It is the circumferential fissures which give rise to stacks of short lava flows.[7]

The volcanoes at the west end of the archipelago are in general, taller, younger, have well developed calderas, and are mostly composed of tholeiitic basalt, while those on the east are shorter, older, lack calderas, and have a more diverse composition. The ages of the islands, from west to east are 0.05 Ma for Fernandina, 0.65 Ma for Isabela, 1.10 Ma for Santiago, 1.7 Ma for Santa Cruz, 2.90 Ma for Santa Fe, and 3.2 Ma for San Cristobal. The calderas on Sierra Negra and Alcedo have active fault systems. The Sierra Negra fault is associated with a sill 2 km below the caldera. The caldera on Fernandina experienced the largest basaltic volcano collapse in history, with the 1968 phreatomagmatic eruption. Fernandina has also been the most active volcano since 1790, with recent eruptions in 1991, 1995, 2005, and 2009, and the entire surface has been covered in numerous flows since 4.3 Ka. The western volcanoes have numerous tuff cones. 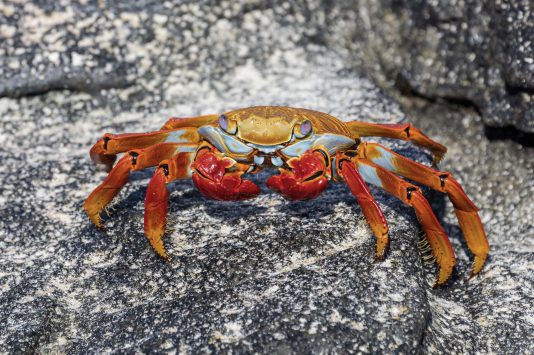 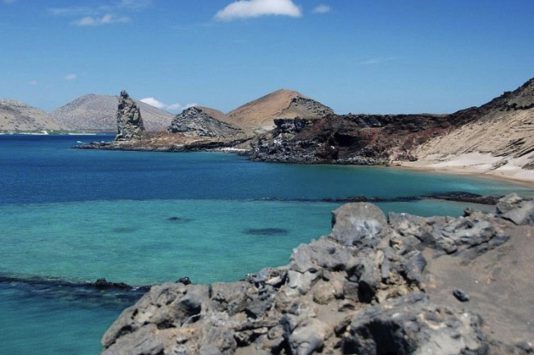