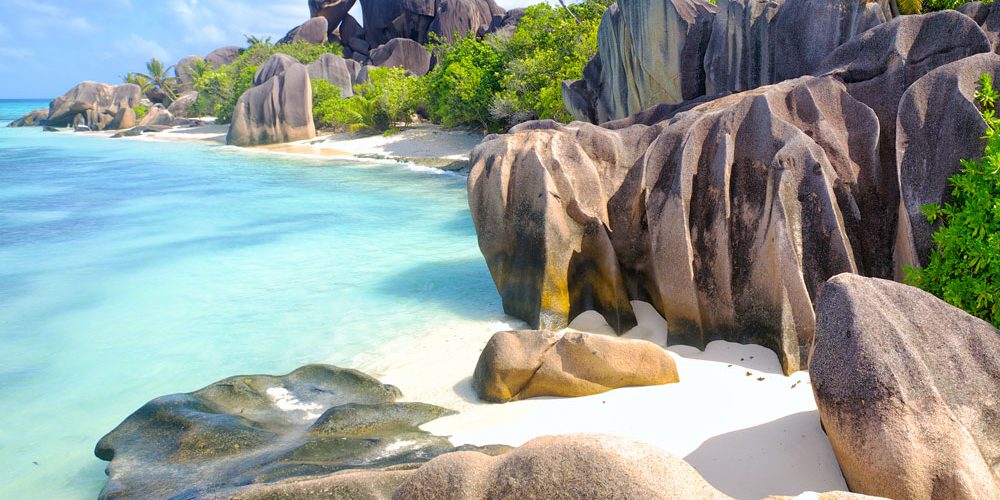 The beaches of the Seychelles archipelago are amongst the most famous in the world and have featured in many movies and advertising spots. Sailing here means you get to experience this dream-like scenery first-hand. Admire stunning coral atolls, rich wildlife that is unique to this archipelago, lush mountains and colonial architecture. The conditions for yacht charter are perfect with year-round tropical temperatures and calm waters. It´s as if you charter a boat in paradise!

Seychelles International Airport offers many daily scheduled direct flights from and to European, African, Indian and Middle Eastern Destinations. There are also some very good ferry and flight connections amongst the bigger islands.

The Republic of Seychelles is an archipelago of 115 islands with the capital Victoria on Mahé Island. It is located in the Indian Ocean, about 1,600 km east of mainland Africa, just south of the equator. Other island states south of the Seychelles are Madagascar, La Réunion and Mauritius. The population is ca. 93,000, 90% of which live in Mahé. It is the smallest population of any African independent state.

The Seychelles have 42 granitic inner islands that contain the three principal islands Mahé, La Digue and Praslin and that span over a total sea surface of about 31,000 km² and a land surface of 266 km². Then there are 73 coral outer islands forming an arc towards Africa which have a sea surface of about 400,000 km². The highest point of those islands is only 9 m and they feature very few settlements. It should be noted that on a one or two-week charter there probably is not enough time to sail both groups of islands. In that case it is better to stick to the Inner Islands exclusively.

The archipelago is spoilt by tropical temperatures moderated by trade winds and mostly calm seas throughout the year. So sailing boat charter is possible all year round and navigation is easy. The landscape is pristine and really paradise-like with long sandy beaches, green mountains, waterfalls and amazing lush wildlife. The highest point is Morne Seychellois in Mahé at 905 m. You can encounter giant turtles and see the famous coco de mer palm trees that are endemic to the Seychelles and that have the largest plant seeds in the world. The underwater flora and fauna is great and ideal for diving and snorkeling as well as lots of other water sports. The Seychellois are very protective of their beautiful environment. There are seven national parks as well as four protected reserves and a lot of safe anchorages are being created to prevent the coral reefs from being destroyed.

On top of that you have friendly locals, a very interesting culture, lovely Creole cooking with healthy fresh food and French as well as British colonial architecture. All this adds up to a perfect charter vacation.

Sailing around the Inner Islands, or the “Seychelles Bank” means calm, easy and protected cruising. There are always less than 32 NM between mooring possibilities. You find many mooring buoys in place around north-west Mahé, north-east Praslin and some neighbour islands. The distance from Mahé to Praslin is about 27 NM and La Digue is just nearby. Mahé alone, which is the biggest island, has miles of scenic coastline with white sandy beaches, coves and grottoes. La Digue and Praslin are home to some of the world´s most stunning beaches. Anchoring on coral ground is not allowed but there are many good anchorages with sandy bottoms at about 5 – 8 m depth. Most of the ports in the Seychelles are located on the three main islands. Port Victoria has 210 moorings for yachts up to 34 m. The new Eden Island Marina can host 140 boats and superyachts up to 100 m length.

Cruising the Outer Islands you encounter the principal island groups of the Amirantes, the Alphonse Group, the Southern Coral Group, the Farquhar Group and Aldabra. Those islands are between 130 and 630 NM from Mahé and much less frequented, yet therefore very unspoilt and special cruising grounds.

Go to the marine parks of Cousin, Aride, Curieuse Marine National Park, Ste. Anne Marine National Park, Ile Coco Marine National Park and St. Pierre. There are specified zones for anchoring and officials will come to the yacht in order to collect the mooring and entrance fees. Entrance fees are from 10 € per person and for anchoring at night from 10 € per yacht are charged
Due to the tropical climate the Seychelles are suited for year-round sailing. The water as well as air temperatures are mostly always between 24° – 32°. The waters are calm because upstream coral reefs are breaking the waves. This makes navigation very easy. There are two main seasons. One from May to October with south-easterly winds. It is dry with only light showers but has stronger winds. The other one from November to March is characterized by weaker north-westerly winds and a bit more rainfall but calmer seas than in the dry season. April is the month in-between seasons and there is next to no wind.

January brings the most rain with an average of 397 mm and June is the driest month with 63 mm on average. If it rains, though, it is mostly over after a few hours and on another part of the island or on another island it will be dry at the same time, so it´s easy to escape the occasional shower. With the exception of the most southerly islands, the Seychelles are outside the range of the cyclone belt and there are no tropical storms.

Visit Praslin and the Vallée de Mai reserve – UNESCO world natural heritage – which is home to the legendary coco de mer palm tree with its huge coconuts that can take up to seven years to mature. There you also encounter some of the rarest bird species in the world and some of the most beautiful beaches in the Seychelles.

Explore Birds´ Island, the northernmost island of the Inner Seychelles. It is situated about 100 km from Mahé and home to the oldest, largest and heaviest turtle in the world which is 170 years old and weighs 300 kg. Hundreds of thousands of birds, some of which belong to very rare species, are nesting there.

Go fly-fishing on the Outer Islands where there are some of the best fishing grounds in the world and you can catch humongous fish in a pristine environment.

Discover La Digue with its lovely architecture. It´s best to rent a bike and cycle round. Visit the stunning beach Anse Source d´Argent that featured in the Bacardi, Raffaelo and other ads with its pink sand and dramatic boulders.

Check out the French colonial architecture, i.e. the historical cemetery with the grave of the legendary pirate Olivier Le Vasseur and the Cathedrale de la Conception Immaculée which is the main cathedral of the Seychelles. There also is a lot of British colonial architecture in Victoria like the clock tower for example. You could visit the botanical gardens as well and learn about the rich local flora.

Drive along the coastal roads of Mahé and explore the varied mix of swanky resorts like Eden Island, sleepy port towns and deserted beaches for the perfect castaway experience. Go up into the mountains to enjoy some stunning views as the one over to Silhouette Island.

You can admire giant turtles in the natural parks. Go snorkeling, diving, kayaking or try any of the other kinds of water sports that are available. Sample the local cuisine. It is a fusion of African, French, British, Indian and Chinese influences and involves a lot of fantastic fresh fish and exotic spices. Explore the nightlife, too. Go to clubs in Victoria and at Beau Vallon Beach and mingle with tourists and sailors from all over the world.